This is the verse I had on my heart the other night, when baby Declan was in the newborn intensive care nursery.  His oxygen had dropped quite a bit, his heart was racing, Ben was exhausted and scared...I remembered when Benjamin himself was the one I worried about, when he was in that horrible accident where he fell off the boat and was hit by the propeller.  He had lost so much blood and was in shock by the time he reached the hospital, deep in the Adirondacks...back then we didn't have cell phones, so I had only the one call from Paul, he was in shock too, gave me the basics...when I asked if Benjy, who was ten years old, was going to make it, he said:  I don't know.  It's pretty bad.  That night, I absolutely wrestled with fear.  I was terrified.  I imagined every scenario, from Benjamin's tombstone, to him sitting in a wheelchair watching his brothers and sisters run around and play.  I didn't know what was going to happen, but I begged and pleaded with God for rest, to trust Him.  Then....I fell asleep, and woke up to a phone call from Paul that Ben was out of surgery, and was stable.  This was the verse that came to me, and comforted me.  Anyway, this thing with baby D. was a trial for Ben and Ashley, but oh my goodness, the drs and nurses know their stuff, and took such good care of him.  He's doing well now, and might even come home today.  (Ben told me he how he felt when baby was whisked to the NICU, I told him I knew the feeling....)

Anyway....there is chocolate in the house...!  Thank you, Margaret and Evelyn!  Jonny brought home Smash, which is Norwegian chocolate covered Bugles. 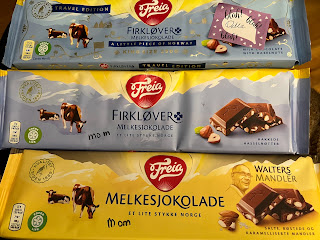 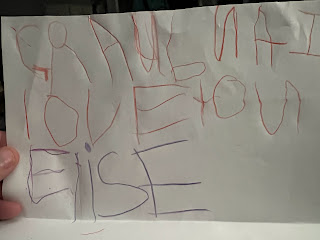 This says "Grandma I love you, Elise" 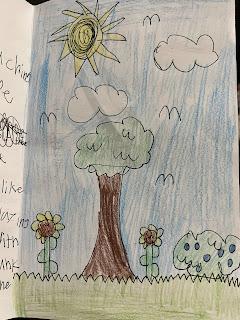 This one is from Anya... 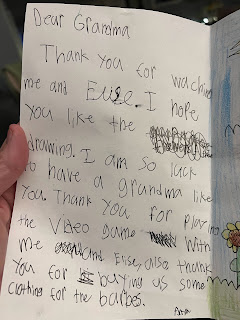 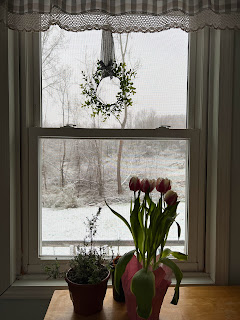 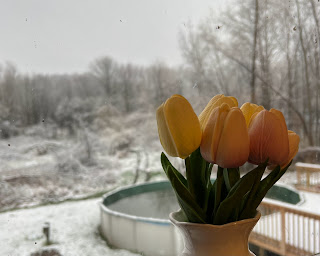 Oh my goodness, so much has happened today!  I went to the pool for water aerobics, then came home and got the bottles and cans, returned those ($40!  That's a lot of seltzers!), then went to Walmart for paint rollers and a few pillows, and a throw rug. ( We're trying to paint/fix up the downstairs bathroom because we are having guests soon.   I am not sure if it's a secret who is coming, so I won't tell yet, but they're staying here.  The bathroom has been on our list for a while now.  The ceiling needs to be replaced because of a washing machine leak above it, but that's not happening before Friday.)
After Walmart was Lowe's, I like Sherwin Williams paint but only the exterior paint is on sale right now, and it's just so pricey...but I ended up paying $55 for one gallon of paint at Lowe's, with tax, ouch.
We then went to Aldi quick...just a few things, oh man prices are going up.  $2.59 for one dozen of eggs.
Home, and no sitting and putting the feet up, no, I changed into my painting clothes and got busy.  Of course when I went to spackle, the spackle had been left open and was no good, so back into Bye-Bye clothes and off to the hardware store.  $40 later, I had my spackle, and some paint for the door, and a cute little roller, and two replacement rollers.  ugh.
Jonathan took down a cabinet that's been there since we built the house.  It was oak, of course, but was chalk painted green a few years ago, and there's just no saving it.  I had bought a cute little Magnolia shelf a while ago from Target for half price, so that's where it'll go.  So many dings and holes in the walls, all spackled up...but it isn't dry yet.  So we primed and painted the door.  I wanted to get the whole room primed tonight, then painted tomorrow, but I'm not sure it'll be ready.
I'm kind of excited about the finished room...I have a few new hand towels,a new shower curtain, a rug, a toilet cover, and trash can, and some candles that'll look nice in there, stuff I've been accumulating for when we fix it up.  That's the part I want to get to.  Oh, I did take the shower curtain pole out to the front yard and spray painted it matte black.
Now, I'm waiting for the spackle to dry, and oops, I sat in my chair.  Muscles ache that I didn't even know I had.
The good news here is this:  since I started this post this morning, baby Declan was released from the hospital!  He made progress by leaps and bounds, and is doing fine!  They are going to keep him safe and sound for a while, we can't visit yet, because there seem to be so many colds and sicknesses going around, which is SO HARD, but I get it.
I will share the pics of his big sisters getting to meet him: 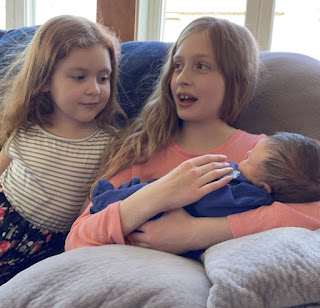 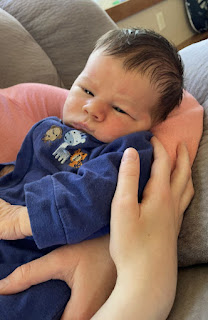 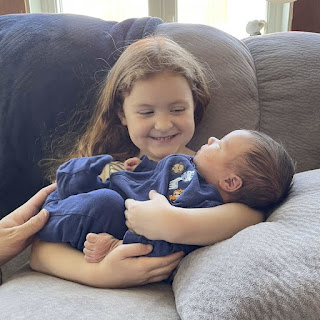 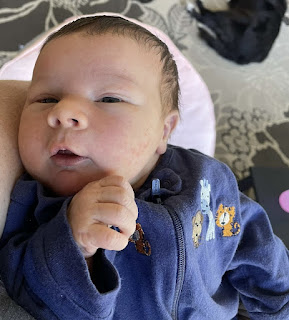 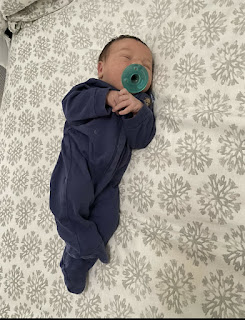 Isn't he just the sweetest?  I can't wait to meet him.  I am so very thankful for cell phone pics though!
The kids talked me into ordering a pizza and some wings...it wasn't hard, there's no way I'm making dinner tonight.  I had planned to make chicken pot pie, but ha, when?  After painting and scrubbing and working and shopping and swimming?  um, nah.  I wish I had a hot tub, right about now.  But I don't, so I'll be thankful for my comfy chair, and that Jonathan is picking up the pizza, which I won't eat, but I will eat a few chicken wings.
Have a nice cozy evening!

The Strawberry Festival at the End of the World
Jun 27, 2022