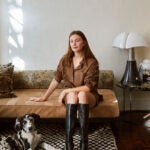 Last year, Madelynn Furlong decided to downsize. “I got rid of pretty much half of my possessions,” she recalls, trading in her 1,000-plus-square-foot apartment in Los Angeles for a one-bedroom half the size in New York’s West Village neighborhood. “So yeah, it’s tiny.”

Yet from the Streeteasy listing alone, she was charmed by the crown molding; working fireplace; arched doorways; and 13-foot, floor-to-ceiling windows. The warped kitchen cabinets? The stained walls? She could fix those herself. “It was an ugly duckling with loads of potential. I just had this feeling I could make it supercozy and personal,” says Furlong. “If you have good architecture, you can add in furniture, paint, and cosmetic touches to hide the fact that it’s actually falling apart.”

Before signing the lease and packing her bags, Furlong not only drew up a floor plan but a game plan to negotiate her rent. The timing was ideal; not only was it winter, but the market was still offering pandemic-low deals. By haggling the price down even more (by $400 a month), she could put those savings toward fixing up the unit, a series of projects she proposed to her landlord. “You can submit them a mood board, and if it’s going to improve the look of the apartment—and you’re not painting something lime green—they’re going to be happy to let you do it. They just won’t pitch in financially,” she shares, laughing. “That’s why, with my apartments, I’ll do whatever I want because I know I probably won’t get the deposit back.”

One of the first things Furlong said goodbye to were the white walls. “I love bold design—a lot of texture and pattern—but I keep everything within a restrictive color palette, which, for me, is pretty neutral,” she explains. You’ll be hard-pressed to find colors beyond her signature beige-and-black-and-cream combo. But in the bedroom, a vintage Moroccan rug by ZouZou inspired the Benjamin Moore Toasted Marshmallow walls and the hunt for a matching CB2 bed set. “It’s like caramel overload, right? Some people hate it,” says Furlong. “I think it’s superfun and sexy.”

Everywhere you look there’s a hint of marble or a moment of contrast, like the living room swathed in Farrow & Ball’s Satin Slipper and the fireplace in moodier Jitney. (Hot tip: An 18-inch paint roller will save you time.) In the bathroom, Furlong struggled to figure out her approach at first. After taking layers of Citristrip to a painted-over window, though, she decided to embrace the lack of a view, coating the trim in black and layering a copper cloverleaf-pattern grate over the bare glass.

Cans of Backdrop’s Dark Arts added a touch of drama to her entryway, and a matter, chalkboard paint version to the lower kitchen cabinets, where she worked to wipe away nearly every trace of primer-white paint. But even after redoing her laminate countertops with a marble-look kit from Amazon and replacing the aged uppers with slices of lumber she stained by hand, Furlong still felt something was off: the fridge.

“I was able to find something that was more vintage-inspired. And because of how small it was, it was only $500,” she says, noting the switch-up was more than worth it, despite the appliance adding up to half the renovation’s cost. “It made such a difference in elevating the kitchen.”

Which was crucial, considering it can be seen from nearly every vantage point in Furlong’s main room (fellow small-space dwellers can sympathize). That’s why she plopped her pedestal table perpendicular to the fireplace to smoothly transition from the kitchen to the living area; it functions as an island by offering more room for food prep than her actual counters. She even traded in her former dining chairs for a new set of stools from Hem that soak up far less square footage. “I can just tuck them under the table,” she points out.

However, resist the urge to get brand-new everything every time you move, she advises. “I think you get to a point in your life where you have bought furniture that you really love,” says Furlong, who simply ordered custom cushions to transform her old De Sede daybed into a sofa.

“When I invest in my home and the way it looks, I’m in turn nurturing myself,” Furlong continues. Yes, the creative had to sell a good chunk of her belongings to move to New York, but she has gained much more, including a 70-pound (and growing!) Great Dane puppy that loves to crawl up onto her lap and bask in the sun streaming through the south-facing windows. For a little while, Furlong was soaking up the good vibes on her own. “Now I have a new dog, a man that I’m going to marry, and a house upstate—all of that happened because I decided to move here,” she says. “It has changed the trajectory of my life completely.”

The post Madelynn Furlong Elevated Her “Ugly Duckling” NYC Apartment One Paint Job at a Time appeared first on domino.