Had the spring of 2020 gone as planned, a day in the life of an average child would have meant actual classrooms, baseball games, middle-school plays, and birthday parties where kids ate too much cake instead of waving from the back seat as a parent drove them past their friend’s house, honking the horn. There would have been jokes and whispers in hallways, cafeterias, gyms, and school buses. As he finished his junior year of high school, my 17-year-old son, Alex, didn’t just miss engineering projects; he missed walking to school with Charlie, grabbing lunch with Johnny or Callan, perfecting his jump shot with Evan and Elliott. He should have been going to movies on Friday nights and flirting at parties on Saturday nights.

Time with other children is a crucial piece of growing up. Relationships with peers are how kids learn about cooperation, trust, and loyalty, as well as how to not just receive support from their parents, but also give it to others. Thanks to the coronavirus pandemic and the measures that parents, schools, and governments have put in place to limit its spread, millions of children across the United States are missing out on friendship. Summer doesn’t necessarily promise much relief, as plans for camp and other activities, such as Alex’s travel basketball tournaments, are also disrupted.

[Read: Tell your kids the truth about this moment]

The consequences of being cooped up with parents and siblings depend on age, home environment, and personality. But the principles of child development do suggest what sorts of responses are natural and which are more worrisome. They also predict which children might be having the hardest time and why.

When schools first closed because of COVID-19, Sarah LeClair did not think that some time away from his second-grade classroom would be so bad for her son, Jeremy. “At first we had the idea he could play outside. We could do assignments slowly, at his pace, and not trap him at the kitchen table all day,” LeClair told me. But after a few weeks, Jeremy, who is an only child, was clearly lonely. Both LeClair and her husband are teachers in Bucks County, Pennsylvania, and spent much of their days this spring teaching online. “We don’t have any neighbors even that he could talk to over the fence,” LeClair said. “He was desperate for human contact.”

Jeremy’s solution was to sit in his mother’s office while she taught Dickens and Shakespeare to high-school juniors. “He had no idea what we were talking about,” LeClair said. “But he was [missing] that let’s-sit-on-the-rug-and-talk-about-our-goals-for-the-day kind of feeling. He hangs out and sits on the floor in my office just to hear kids talking.”

Being isolated at home for months is a very different prospect for an 8-year-old than it is for an 18-year-old. Even kids of the same age have different interests, needs, and personalities, and their responses to quarantine will be different too. Some children who dealt with bullying or social anxiety prior to the pandemic might have found social distancing to be a relief. Not everyone actually wanted to go to prom. But others with mental-health issues or a less-than-happy home environment are more likely to suffer from being out of school or camp. “It’s age-dependent, but more so it depends on what actually happens to kids when they are at home,” Stephanie Jones, a developmental psychologist at Harvard, told me. “Little kids, in particular, are barometers of family stress.”

[Read: The kids aren’t all right]

The good news is that children—especially young children—are surprisingly resilient as long as they have at least one supportive adult in their life. Preschoolers and kids in the early elementary years need their parents more than they need their friends. That’s encouraging, since virtual interactions with peers don’t work for many of the youngest kids. Ryan McGillen, a 37-year-old divorced father in Clinton Township, Michigan, learned that lesson when he tried to set up Zoom sessions for his 4-year-old son, Max, and his preschool classmates. They devolved into “13 kids all screaming at once,” McGillen told me.

“The most important thing that all children need is a sense of safety,” Jack Shonkoff, a pediatrician who directs Harvard’s Center on the Developing Child, told me. “The younger you are, the more that sense of safety comes from adults who care for you.” Some of that security comes from routine. Children “are very reliant upon consistent, predictable experiences,” Jones said. Even small changes in routine can show up in children’s behavior. For example, when McGillen and his ex-wife arranged for Max to spend the day at one home and the night at the other, to better balance working remotely and parenting, Max started to throw more tantrums. Now Max spends his days and nights in the same home and has a visual schedule as well. His parents are hoping that the return to his usual routine will help Max regain his equilibrium.

Early adolescents are less likely to benefit from the security that comes from being with their parents, because around the age of 10 or 11, children’s social lives take on increasing developmental significance. The social skills crucial to this life stage can’t be taught by reading or Zoom lessons. “It’s like a sport. You need to practice,” Ronald Dahl, a pediatrician who founded the Center for the Developing Adolescent at UC Berkeley, told me. Under normal circumstances, children come by that practice by interacting with one another. “They have a natural affinity for learning about not just their peers and those strong friendships, but it’s about ‘me’ in relationship to others,” Dahl said. Kids want to figure out who they trust, who likes them, and how to find a niche where they can shine. That aspect of growing up kicks into high gear in the middle-school years. It is also something that many kids have had to put on hold during the pandemic.

Eleven-year-old Ella Muse, a passionate dancer who lives in Marietta, Georgia, is an apt example. Ella was devastated when her dance classes were canceled. It did not help that before COVID-19, Ella’s fourth-grade year had been rocky socially. She is deaf and uses cochlear implants, something she is just beginning to accept. “Nuance and social cues are challenging [for her] sometimes,” her mother, Carianne Tucker, told me, but Ella still cares immensely about what others think of her. Ella went into the shutdown without her favorite activity or a tight group of friends she could easily keep in touch with outside of remote classroom time. The social isolation has been much more difficult for her than it has been for her 7-year-old brother and 13-year-old sister, who has some social anxiety and experienced the shutdown as a bit of a relief.

The significance of children like Ella hitting pause on the social and emotional practice they were getting in school and in their extracurricular activities is unclear. Scientists have yet to quantify the sensitive periods of learning for this particular set of skills. And the consequences depend on how long the disruptions last. If, by the fall, school is relatively back to normal, this time away may turn out to be just a small speed bump. “Even if some of the learning happens three or six months later than it would have, that’s not likely to have a big effect,” Dahl said. Even if more waves of infection occur and the separation from peers drags on, he said, children won’t be permanently set back. But some might be slightly delayed in forming their identities, finding their passions, and forging the friendships that often go with them.

In some ways, the hardest-hit groups are older adolescents and young adults, who are meant to be actively separating from their parents. Instead, they are moving back home. During quarantine, Lisa Acker’s three college-age sons all headed back to their parents’ New Jersey home. Acker has noticed that their social lives have suffered. “If I say, ‘What would you be doing?,’ they say, ‘I’d be going to house parties, dorm parties, concerts. I’d be with my girlfriend,’” she told me. “When they do reach out to people, they have nothing to talk about.”

[Read: How the coronavirus is influencing children’s play]

Children of all ages, of course, can have bigger problems than being at loose ends and missing their friends. That all-important sense of security might be harder to achieve for families who were thrown into severe economic straits by the shutdown and have had to worry about basic needs such as food, shelter, and medical care. For such families, Jones said, the best way to support the kids is to make sure that support is available for the parents in the form of food banks, unemployment benefits, public clinics, and the like.

In some kids, the loneliness brought on by social isolation might turn into depression or other mental-health issues. The time to worry, says Elizabeth Schwarz, a child psychiatrist in New York City, is when kids display extremes in behavior, such as sleeping all the time or not at all, increased irritability, and changes in weight. One mother in Walnut Creek, California, who asked that I not use her name to protect her family’s privacy, was shocked when, the week after shelter-in-place orders went into effect in California, her 15-year-old daughter handed her a letter revealing that she was bulimic. For the teenager, the pandemic brought with it a confluence of stressful events—a disappointment in a school election, fear of losing her 104-year-old great-grandmother, a breakup with her boyfriend. Normally, her mother told me, she’d be able to channel the stress through activities and socializing. But because of the pandemic, “she had things right and left [fall] off of her calendar.” Fortunately, the family has been able to get good medical and counseling support for their daughter. And in a strange twist, the pandemic has enforced space and time for recovery.

Even for parents whose kids seem to be handling things well, the transition to summer brings more uncertainty. Different families, counties, and states are living with very different rules, as well as different levels of willingness to abide by those rules. “Can we just be honest? I’m freaking out about what everyone will do,” Jones said of her own two children. The best that adults can do for children is provide some certainty within the uncertainty. Kids’ need for routine and a sense that the adults in their life can keep them safe applies to summer fun too. “Parents can say, ‘If things open up in two weeks, you’ll go to camp,’” Schwarz said. “‘If they don’t, we will get a slip-and-slide.’” Some public-health experts have also begun to suggest that two isolating families can come together, allowing children and adults to socialize with a slightly increased but still limited risk.

And everyone stuck at home—who is old enough—should continue to acknowledge that this enforced togetherness is unusual. The Acker boys, for example, have brought their college habits back to New Jersey, making mac and cheese and eggs for dinner at 1 a.m., which led their mother to set some new ground rules in the kitchen. During a tense family moment recently, the oldest son, Ian, 22, who had planned to stay in San Francisco after his college graduation in May, looked at his mother and said, “I’m not even supposed to be here.” She realized he was right. “I thought, That’s so true,” she told me. “Let’s just start with that.” 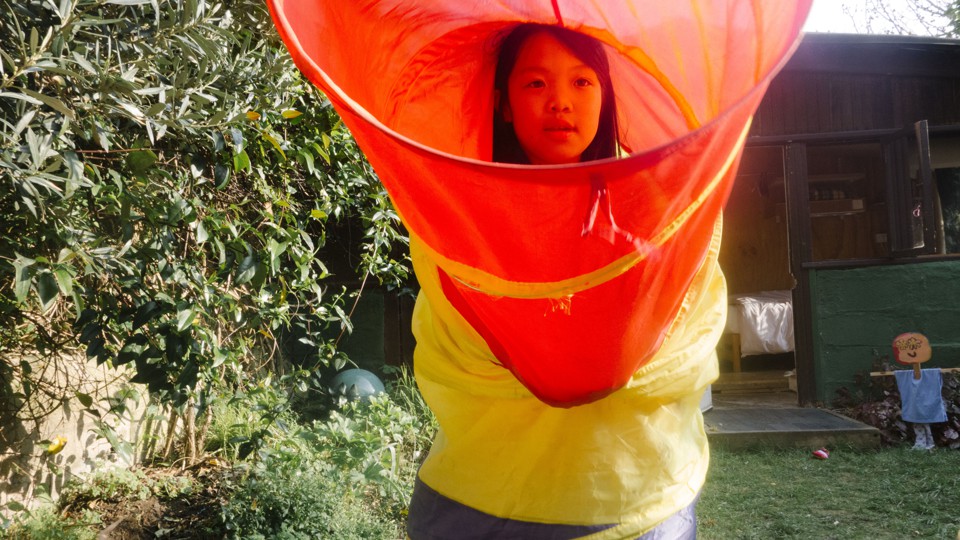